The Honey Sliders 2nd Annual Fundraiser for Support Act with special guest Tim Rogers.
Together they perform The Rolling Stones’ classic album ‘Let it Bleed’ in its entirety – plus more.

From the harrowing opening track ‘Gimme Shelter’, to the album’s poignant closure ‘You Can’t Always Get What You Want’, The Rolling Stones’ 1969 album ‘Let it Bleed’ was a coming of age that cemented their place in the pantheon of classic rock. Released only weeks after their founder Brian Jones was found dead in his swimming pool, and only days before the disaster of the Altamont festival, Let it Bleed heralded a new sound and direction for the Rolling Stones.

The album cover, featuring a cake baked and decorated by Delia Smith, is an instantly recognisable symbol of the late 60’s counter culture and the growing anti-war sentiment that had spread across the globe. A mix of hard rocking blues based songs with humour spread through the country rolickings of ‘Country Honk’ and the title track ‘Let it Bleed’, this album is timeless and plays such an important role in the history of popular music. 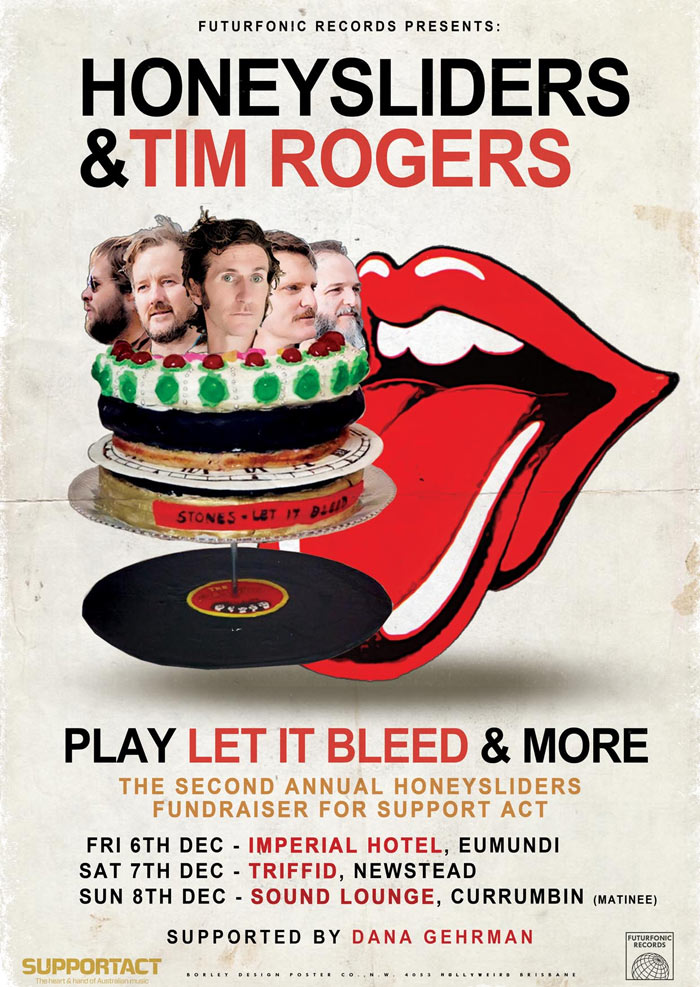 Crashing onto the Australian music landscape in the mid 90’s, Tim Rogers has proven himself to be one of the few true rock stars to come out of Australia. Widely regarded as on of our greatest story tellers and hard rocking gentlemen, Tim is well versed in all the attributes required to sing these songs with conviction. Tim has fronted The Honey Sliders before when they recreated The Stones’ album Sticky Fingers in 2016. Part of Tim’s experience with those shows made it into his book of memoirs titled ‘Detours’.

The Honey Sliders are the Brisbane based country/rock/soul outfit led by singer/songwriter Danny Widdicombe (The Wilson Pickers, The Go-Betweens, Bernard Fanning and more). With a deep love of retro music, The Honey Sliders have wowed Queensland audiences with their annual concept shows recreating classic albums. Since 2013 they have performed Hendrix’s ‘Axis: Bold as Love’, Neil Young’s ‘On the Beach’, The Band’s ‘The Last Waltz’ (featuring Bernard Fanning, Troy Cassar-Daley, Jeff Lang and more), The Stones’ ‘Sticky Fingers’, The Beatles’ ‘Abbey Road’, and Cream’s ‘Disraeli Gears’ – all to sold out audiences.

For more information on Support Act, head to supportact.org.au